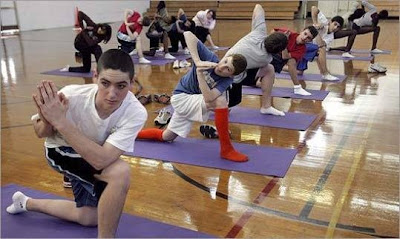 Marks-hunting home tuitions could become a thing of the past as new
research has revealed that scoring skills could be increased as high
as 50 per cent through yoga exercises.

The research carried out in Delhi among 1,130 students between 9 and
14 years has shown that doing yoga increased the ability to
concentrate, retain and recall information.

The children increased their scores from 24 per cent to 59 per cent
after doing a 15-day class room yoga training compared with the five
per cent increase for those who did not.

The 1,130 students of 15 schools in the capital were divided into two
groups for the assessment. While one group was given yoga training,
the other was kept as a control group. Different tests were conducted
before and after the training.

The students were put to four types of tests--Audio, visual,
audio-visual and answering questions after hearing a story.

The research was done by 10 trained yoga teachers of 'Atmadarshan
Sadhana Kendra' under a three-year project of the state-run Central
Council of Research in Yoga and Naturopathy. About 7,000 students in
Delhi, Punjab and Himachal Pradesh were covered under the project,
which ends in October.

In the audio test or recall ability test, 25 names of political
leaders like Sardar Patel and Lala Lajpat Rai were read out with a gap
of five seconds between two words.

The visual test (recognition test) had pictures of historical and
religious places such as Red Fort, Hawa Mahal and Somnath Temple, and
the audio-visual (recognition and recall test) contained household
objects known to the children like tomato and potato.

In the final test, an inspiring story about truth based on the lives
of towering Indian personalities like Raja Harishchandra and Mahatma
Gandhi was told and the children were asked ten questions from the
story.

After each test, the students did a three-minute meditation before
writing down the answers in another three minutes.

On the contrary, the control group showed only a marginal increase of
4 per cent in the first two tests and 7 per cent and 6 per cent in the
next two. In some cases, the performance of the group declined as low
as two per cent.

''The effect of yogic practice is the development of all round
personality of students. It allows them to relax their body and mind
and coordinate between the two better leading to increased awareness
and concentration,'' says project officer Yudhisthar Paul.

The yoga group did exercises for 15 days in a three-hour session
daily. The yoga practice included 'yogasanas' for flexibility of body,
'pranayam' (breathing exercise) for concentration of mind and
meditation for memory development.

''We were delighted that encouraging result came from students
belonging to poor families,'' says Mr. Paul. ''They were an ignored
lot, and when attention was given, they grabbed the opportunity,'' he
explains.

Some children, who were having behavioral problems, also gained from
the yoga exercises taught by the centre, which is the only institute
after the Yoga Institute in Varanasi, giving such training in the
country.